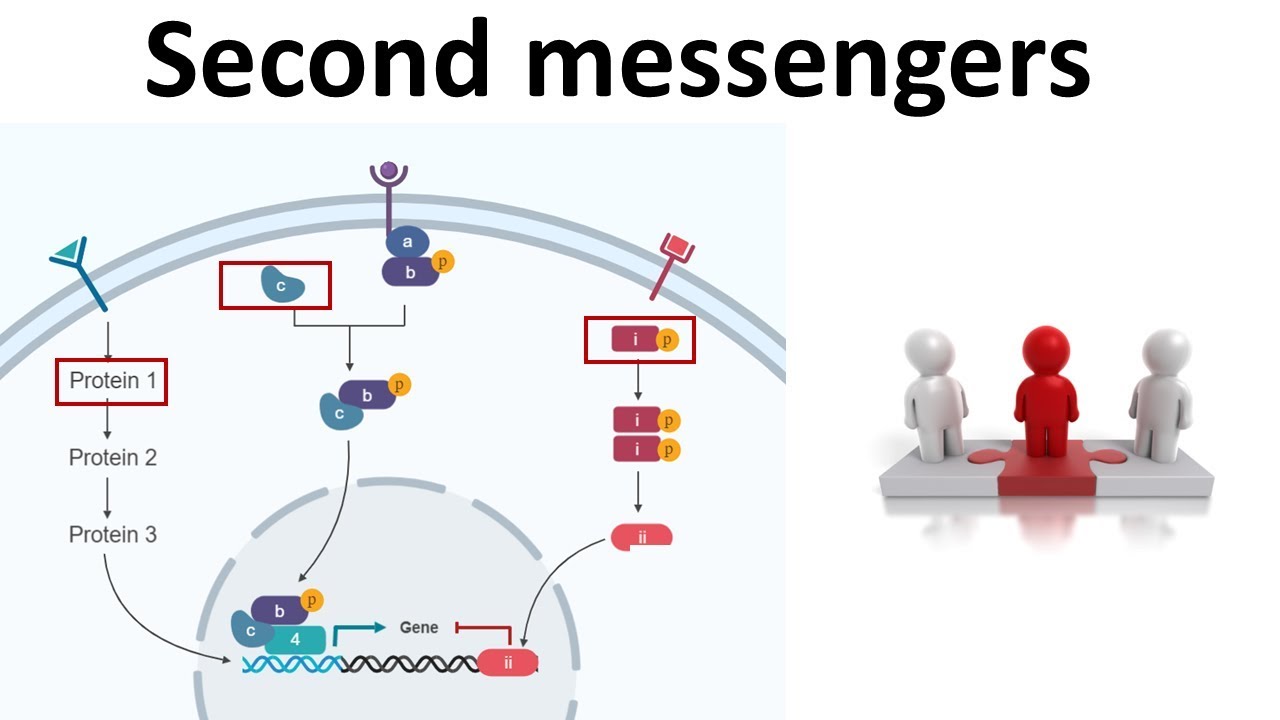 Additionally, second messengers can have multiple downstream targets, which extends the range of signal transmission. A large number of second messenger molecules have been characterized, including cyclic nucleotides (eg, cyclic adenosine monophosphate, or cAMP, cyclic guanosine monophosphate, or cGMP), ions (eg, Ca2+), molecules derived from phospholipids (eg, inositol triphosphate), and even gas, nitric oxide (NO). The calcium ion Ca2+ plays a fundamental role in the rapid responses of neurons and muscle cells. At rest, cells maintain a low concentration of Ca2+ in the cytoplasm, expending energy to pump these ions out of the cell.

When activated, neurons and muscle cells rapidly increase their cytoplasmic Ca2+ concentration by opening channels in the cell membrane, allowing Ca2+ ions from outside the cell to rapidly enter. Cyclic nucleotide cAMP is synthesized by adenylyl cyclase enzymes, which are found downstream of heterotrimeric G proteins (guanine nucleotide-binding proteins) and receptors. For example, when epinephrine binds to beta-adrenergic receptors on cell membranes, G-protein activation stimulates cAMP synthesis by adenylyl cyclase. The newly synthesized cAMP can then act as a second messenger, rapidly propagating the epinephrine signal to the appropriate molecules in the cell.

This stimulating signalling pathway leads to the production of effects such as increased rate and force of contraction of the heart that is characteristic of epinephrine. Caffeine also potentiates the action of cAMP by inhibiting the enzyme phosphodiesterase, which breaks down cAMP; the enhancement of cAMP activity contributes to the overall stimulating action of caffeine. As a gas, nitric oxide (NO) is distinguished among second messengers by its ability to diffuse across cell membranes, allowing signal information to pass to neighbouring cells.

There are 3 main classes of second messengers:

Some of the hormones that achieve their effects through cAMP as a second messenger:

Cyclic AMP is synthesized from ATP by the action of the enzyme adenylyl cyclase.

The resulting increase in cAMP activates the appropriate response in the cell (or both):

Cyclic GMP is synthesized from the nucleotide GTP using the enzyme guanylyl cyclase. Cyclic GMP serves as a second messenger for:

Peptide and protein hormones such as vasopressin, thyroid-stimulating hormone (TSH), and angiotensin and neurotransmitters such as GABA bind to G protein-coupled receptors (GPCRs) that activate the intracellular enzyme phospholipase C (PLC). As its name suggests, it hydrolyzes phospholipids, specifically phosphatidylinositol-4,5-bisphosphate (PIP2), which is found in the inner layer of the plasma membrane. PIP2 hydrolysis produces two products:

The increased calcium is necessary for NF-AT (the “nuclear factor of activated T cells”) to activate the appropriate genes in the nucleus.

The remarkable ability of tacrolimus and cyclosporine to prevent graft rejection is due to their blocking of this pathway.

The binding of an antigen to its receptor on a B cell (the BCR) also generates the second messenger’s DAG and IP3.

Normally, the level of calcium in the cell is very low (~100 nM). There are two main stores of Ca2+ for the cell:

However, its level in the cell can increase dramatically when channels in the plasma membrane open to allow its entry from extracellular fluid or from reservoirs within the cell, such as the endoplasmic reticulum and mitochondria.